Firstly, if you’re in Australia, you can donate to one of these organisations. One of the things we ought to remember is that situations that are not as newsworthy as the Haiti earthquake need money too. These groups will ensure that any funds collected beyond what is currently needed for Haiti will still be useful. That said, it looks like Haiti will continue to need support for a while longer: 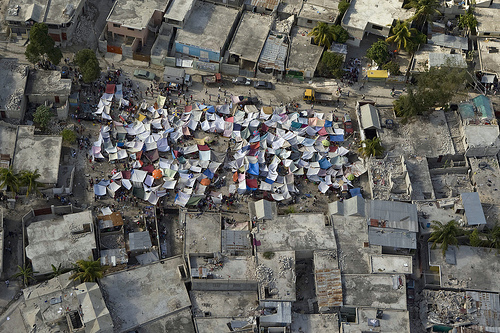 [image: Haitians set up impromptu tent cities through the capital, 13 Jan 2010, from the United Nations Development Programme photostream on Flickr, with a Creative Commons license. Click on the photo for a larger image.]

What follows is a quick summary of some of the picture stories of the Haiti disaster and discussion around those pictures.

Prison Photography has a comprehensive list of links and summaries of photographic work, as well as discussions about the general Haitian situation and about the role of photography in the crisis. There’s a lot here, but it’s a good job of emphasising some of the more in-depth documentary work that’s been done, some of which preceded the earthquake.

dvaphoto offers a thoughtful round-up of various blogs and op-ed pieces. (Both of the above via Joerg Coelberg at Conscientious.)

“Preventing Haiti’s Next Crisis”, a NY Times story about the wider questions of development and economics.

“Disaster Photography: When Does it Cross the Line?”, an npr story about the potentially exploitative impact of photography on the situation. (Both of the above via Jim Johnson at (Notes on) Politics, Theory & Photography, who says that “the worries are more or less wholly misplaced […] The images give us some sense. They help us imagine how horrible conditions really can become.”)

“The Disaster Pool”, from The New Republic, on the idea of pooling coverage in situations like this, so that the massive attention from Western journalists doesn’t hamper relief efforts. (via James Pomerantz at A Photo Student.)

The Lede Blog at the NY Times has good updates of the situation and links to coverages from lots of sources. The Lede is generally pretty good way of following the breaking news from whatever the current important world news story is.

The Lens blog, also at the NY Times, has good visual current and past coverage of Haiti. Also a good source of current picture journalism.

Médecins Sans Frontières has a Photo Blog, with the most recent pictures being from Haiti of course, but it’s a good chronicle of their work internationally. The Field News section of the MSF’s American website has photos and video; a good multimedia resource on their work.

Slate (with some good stories like “What’s the best way to dig through rubble?“) has a Magnum photo gallery of “Haiti as it was“, with pictures from decades ago.

“Requiem for Port-au-Prince” is a Foreign Policy feature; sort of a slide set that features excerpts of journalism and writing on Haiti, pre-earthquake.

In “Widening the Catastrophe”, Robert Hariman at the No Caption Needed blog steps away from the deluge of photographs to examine a single picture of a man, collapsed in an office, being offered some water. The location is the US, and the Haitian man has just heard of the deaths of his wife and family. Hariman makes some pertinent points about the need to widen our understanding of the situation beyond the crisis towards the network of inequalities that connect Haiti to places like the US.

A lot of these links and discussions aren’t just relevant to the immediate recent events; some speak to the wider situation and context, while others are good places generally for continuing discussion and visual stories.

Update 4 Feb: Late Night Live tonight had an interview with Sheri Fink, journalist & doctor, who was on the scene in Haiti. She discusses the medical and ethical questions but also made the point that disasters have happened before; why aren’t the relevant agencies learning from them to coordinate themselves better? It’s a point similar to Michael David Murphy’s, in a good post about possible alternative ways to photograph a crisis like this (via Conscientious).